How Figure Skating Lost Its Way… 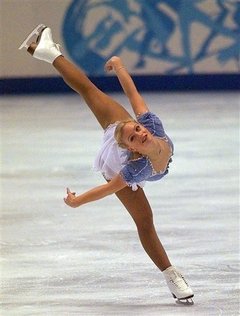 Figure skating was a gentleman’s pastime of drawing diagrams on the ice with skates when American ballet dancer Jackson Haines started performing his art on skates. His creation was called: “free skating” and added to the sport so as competition developed, participants were required to draw diagrams as well as dance on the ice and ladies became interested.

People paid to see Jackson Haines’ exhibitions; that produced the traveling ice shows that recruited performers from the competitions. People would not pay to see diagrams drawn, that was eventually dropped from the sport.

Competition was necessarily more like a dog or horse show than a ball game or horse race; it had to be judged. Judges were told to evaluate both technical and artistic elements to pick winners, articles and arguments discussed whether figure skating (by now a misnomer) was really a sport or an art.

Judged results are perennially second-guessed, the endless debates drove the rule makers toward ever more detailed and more measurable judging standards. The ‘short program’ was added to measure skaters’ performances of mandated elements; the long program remained free skating. To reduce the judging problem by helping to distinguish some skaters from others in an inarguable fashion, the short program relied primarily on multi-rotation jumps. Adding a rotation to a jump raises the difficulty on a rising curve, the steepness of which increases rapidly. It made a handy sorting tool for judging figure skaters since it was readily recognized by the public. That reduced the heat on the judging.

A now notorious Salt Lake City Olympic judging scandal hyped the ratings for the TV producers and lit a fire under the sport’s managers, who responded with a new judging paradigm. Unfortunately, that has also produced a new sport in the eyes of the audience, one that is attracting less interest.

The overall evaluation of technical and artistic elements combined into a placement was replaced with lists of point values for each individual element. Some or all of those points are awarded according to how well each element is performed. More difficult elements carry more points and so, are more often chosen by skaters. The risk of failure is cushioned by the awarding of at least some of the points when an element is poorly performed, but those points are earned from the judges at the expense of the audience, that sees only repetitious elements, too often poorly performed.

Whatever judging credibility enhancement has accompanied this change, is offset by the decision to confer anonymity upon the individual judges, who before, displayed their marks in a way all could see. The system now hides who did what to whom, removing the heat from individual judges as well as confidence from the system. Counterintuitive results of course continue, but individual allegedly corrupt judges are replaced by allegedly corrupt juries, which seems a step more backward than ahead.

The sport lost its way when it chose to ease the judges’ task by counting jump rotations. Each added rotation reduces the number of people capable of accomplishment by an algebraic factor. The added revs also increase failure rates and do nothing for artistry. The untrained eye often can’t distinguish a triple from a double; even when perfectly executed, little is gained for the audience.

The sheer difficulty of added rotations drives away huge numbers of wanna-be participants that are needed in the ice rinks to pay their upkeep; rinks are expensive places to build and to operate. Figure skating is among very few widely recognized sports that has relatively few participants as a support base. Over 5 times more people play hockey. But the sport was not content adding mandated elements that most will never accomplish; it also maintains a system of testing that bars skaters from competing above beginner levels unless they can demonstrate that they have mastered the required elements, very much including those multi-rev jumps. Unsurprisingly, the numbers passing these tests fall rapidly as the tests proceed up the ranks. The beginners who ever reach the novice level of testing approximate 10 percent; the other 90 percent have disappeared. This isn’t a business model appealing to rinks that need to maximize ice use to cover high energy and liability expenses.

So the sport has ignored the interests of its audience, the facilities it depends upon and nearly all the folk who might wish to play the sport, but aren’t young, athletic, ectomorphic females whose parents have sufficient disposable dollars and a willingness to upend their living schedule. From this, the sport has lost its income along with its audience; it is running on past savings to maintain is accustomed operations. Those savings have bought the luxury of time to plan for its future but if that is occurring, there is no sign of it.

Figure skating originally was a pastime for gentlemen who enjoyed drawing diagrams on the ice with skates. Nobody else paid much attention, but the gentlemen didn’t care. That attitude seems to remain unchanged within the sport, and appears to be defining its future.

Suspicious of government, doubtful of economics, fond of figure skating (but the off-ice part, not so much) Couple of degrees in government, a few medals in figure skating; just reading and suspicion for economics ...
View all posts by Jack Curtis →
This entry was posted in Art, Business, Competition, Entertainment, Figure Skating, Finance, Fiscal/Financial Responsibility, Politics, Sport and tagged Art, Business, Dance, Entertainment, Figure Skating, Sport. Bookmark the permalink.

1 Response to How Figure Skating Lost Its Way…