Will Figure Skating Arise From its Fall? 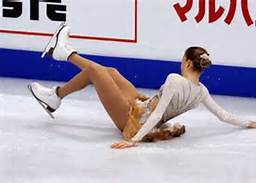 Figure skating, like tennis, was the pastime of daughters of well-to-do country club folk who could afford it, until television ratings lifted both to popular notice. But while schools and parks installed tennis courts, expensive ice rinks were ignored. Tennis developed from growing masses of participants; figure skating developed as a high ratings TV show.

Reasons are debated but the fact is, nobody much watches figure skating anymore; it is relegated to a few brief annual appearances on sports channels. The sports’ governing U.S. and World bodies are existing on savings; neither has income enough anymore to support present programs. So, what is the future of this once highly rated sport?

To us, it seems parallel to the future of the U.S, a once highly rated nation. Neither can afford current spending indefinitely. Too long continued deficits will put the U.S. into the spot now occupied by Greece. U.S. Figure Skating and the International Skating Union are no better off. Meanwhile, the Environmental Protection Agency and the Federal Energy folk combine to keep boosting the cost of the power used to make ice for figure skaters.

The sport will go on where government pays its tab for the international attention produced but that too is in decline. While schools fund tennis, families must fund figure skating; the number of families with that capability is shrinking.

Do you know who is the current National Roller Skating Champion? If so, you probably know the National Tiddly Winks Champion as well. Before much longer, the dismal economics of ice rinks will put figure skating into the same condition. At least until a suitable substitute for ice becomes available or energy becomes cheap again. However, as so few are watching now, few will notice.

A pity; figure skating provided many exciting and beautiful moments in its regrettably brief time under the lights.

The sport won’t vanish entirely of course; it existed before popularity came upon it and it will exist after, too. But it won’t be the same and few will care. This year’s roller skating national championships will be held next month at the Albuquerque, New Mexico Convention Center as they were last year. Few noticed; the skating was not what it used to be. The ‘sport’ now only exists for its participants and the remaining roller rinks that house it. So it is coming to be with figure skating, for what amount to the same reasons.

But unlike roller skating, figure skating on ice has been beautiful while it has lasted.

Suspicious of government, doubtful of economics, fond of figure skating (but the off-ice part, not so much) Couple of degrees in government, a few medals in figure skating; just reading and suspicion for economics ...
View all posts by Jack Curtis →
This entry was posted in Economics, Finance, Sport and tagged Audience, Figure Skating, Television. Bookmark the permalink.

3 Responses to Will Figure Skating Arise From its Fall?