Thoughts About Ebola For Those Tired Of Hysteria … 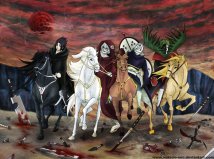 The Four Horsemen of the Apocalypse

Dedicated as it seems to manipulating rather than informing us, our media has soaked us in ISIS and Ebola as though no other significant news exists, and continues to do so. So we will share some thoughts on Ebola; feel free to disagree.

First, this complaint: Despite the endless hours of Chicken-Little, sky-falling, carny-pitch “news” provided so far, we know little of what is going on. Questions are not answered: What is the death rate of Ebola? Does it kill everybody, or some percentage of cases? If the last, what is the percentage at the moment? Is the death rate the same everywhere, or does it vary? Where are the cases coming from? We know: Liberia for sure, but is that everywhere or just in some places in the country? Is the death rate the same everywhere? If not, why? The list goes on … and no answers are forthcoming from our reporters.

Next, our species has died in plagues throughout its history; the most recent maybe being AIDS. We’ve paid attention and been worried but nothing like this time. Why the difference? Might there be a political reason? We note thatEnterovirus D68 is paralyzing and killing kids around the U.S. in the hundreds, a lot more than Ebola right now, yet it’s sitting on the back burner. Why? Chikungunya virus is now all over the Caribbean and showing up in Central America … and the U.S. Mostly ignored, maybe a result of the Central American immigration issue? Another concern is a bit of south of the Rio Grande nastiness called: Chagas disease. It is transmitted by a little bloodsucker called the “kissing bug” which is common in the U.S. southwest, though these northern bugs are thought not to carry the disease. What will occur when they start feasting off infected Central Americans? So there’s much to consider besides Ebolo as we look ahead.  And lest we foeget, both tuberculosis and whooping cough seem to be returning too.

Immigration is a factor, too. We are seeing Africans who are able, bringing heir Ebola to the U.S. for better treatment, presently something of an illusion as there seems to be no treatment available anywhere. What is going to happen to immigration into Europe and the U.S. if Ebola spreads in Africa and other poor places? E.U. politicians are now using Ebola to demand cuts in immigration. That may be easier legislated than accomplished.

A current report from a NJ Customs Agenjt says the the U.S. border is not prepared to deal with Ebola. President Obama will likely be blamed; how could he know this was coming? How do you prepare for something like this? And how do we know it won’t blow over as past Ebola seasons have done? No president can protect us from everything. Or often, from much of anything.

All the news hysteria has fertilized the conspiracy folk too. We are reminded of the many, many thousands of hermetically sealed “FEMA” coffin liners stored at Madixon, GA, just outside of Atlanta and at other places. Those are what will be needed to bury or burn contagious bodies of Ebola victims. We are asked, with a knowing sneer, “How did the Feds know they were going to need all those coffins?” We think to ourselves: Well, we don’t know yet that we’re going to need them. And we do know that there’s a lab at Fort Detrick, MD that specializes in germ warfare, so there must be others elsewhere. And terrorists would know that, too. Plus human history is full of recurrent plagues. A tsunami killed a quarter of a million inSoutheast Asia a few years ago. We know the conspiracy folk won’t pay attention to any of that, but we do.

So there’s a lot to consider, most of it beyond our individual control and much of it beyond government’s control. And a   lot that is being ignored whether controllable or not. It mainly adds up to: our media aren’t much help anymore; should we really keep on paying their salaries? We do — for the moment, anyway, have the internet with which to inform each other. We need to hang onto that, and it won’t be easy with both government and big business desperately wanting it for themselves.

We don’t recall that economic collapse was among the Four Horsemen of the Apocalypse, but he will be no less effective for driving a car instead of riding a horse. And his four mounted likely accompanists are not lessened by their old fashioned transport. We are as exposed as our ancestors to them all; we just prefer to overlook it. We should not overlook it, but media huysteria short of facts, is of little halp.

Rational though, the last, desperate refuge of humanity, has always done more for us than has panic, though it is more work and often, mush less fun.

Suspicious of government, doubtful of economics, fond of figure skating (but the off-ice part, not so much) Couple of degrees in government, a few medals in figure skating; just reading and suspicion for economics ...
View all posts by Jack Curtis →
This entry was posted in Immigration, Politics, The News Media and tagged Ebola, History, Panic. Bookmark the permalink.

5 Responses to Thoughts About Ebola For Those Tired Of Hysteria …